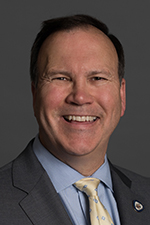 Jon Buttram is serving his eighth term on the School Board.

He has been active as member, chairman, vice chairman and legislative liaison for the School Board. In addition, he has provided leadership as the chairman of the Northeastern Region of the Virginia School Board Association (VSBA) and in support of the most recent School Bond Referendum Committee. He has been active in city schools through multiple

PTAs, as an instructor for after school activities (Hands-on-Science), as a high school science fair judge, and Odyssey of the Mind coach and judge. He has also been active in a number of city and community organizations, holding office with the Park and Recreation Advisory Board and the Southeast Fairfax Citizens Association (SEFCA), as well as serving on the Elementary School Consolidation Task Force and two Southeast Fairfax Traffic Calming Task Forces. He also has served with the ad hoc committee for the disposition of Green Acres, whose purpose was to seek an appropriate community-oriented disposition for the former Green Acres Elementary School.