Erected in 1873 for the then considered exorbitant cost of $2,750, this building is the oldest two-story brick public school house in Fairfax County. Its bricks were made from a clay pit on the Farr property across Main Street. The front (T-section) was added in 1912.
The building served proudly as the area's principle school until 1925, when the "new school" was opened next door.

Listed on the Virginia Landmarks and National Historic Places Registries.

Union soldiers burned the original Farr Homeplace after they were fired upon by young Richard Ratcliffe Farr. Upon his return from the war, Farr first built Grandma's Cottage for his mother, then this home, using bricks made from a clay pit on the property. Each of the home's five baroque chimneys has a cross worked into the design. Farr's sons, Wilson and Rezin, both taught at the old Fairfax Elementary School. Wilson later served as Virginia's Commonwealth Attorney.

Built by Dr. Samuel Draper, this house served as his home, office, and examining room. Its Flemish bond brickwork, box-like appearance and large end chimneys are typical of Federal style architecture. Many of the structure's original out-buildings have been converted into shops.

D) Ratcliffe-Allison-Pozer House
Open from 11 am to 2 pm Saturdays April through October
Tours available by appointment; email or call 703.385.8414.


This structure is the oldest house in the City. The eastern portion was built by Richard Ratcliffe in 1812 to specifications of the original lot sales in the Town of Providence (to become Fairfax in 1875), "at least 16-feet square with a brick or stone chimney."

Joseph E. Willard, who served as lieutenant governor of Virginia and minister to Spain, financed the construction of Old Town Hall and gave it to the town in 1900. He was said to have been the most influential political figure in Fairfax County at the turn of the century. He was the only child of the Confederate spy, Antonia Ford and Joseph C. Willard, a Union major, and co-owner of the famed hotel in Washington D.C. A renovation of the hall by the City and Historic Fairfax City, Inc. was completed in 1987. Second floor renovations began in 1995 and are now complete. Many residents saw their first motion picture here in 1911 (the admission price was 10 cents).

The Fairfax Herald was established in 1882 by Capt. S.R. Donohoe who moved it to this small one story structure in 1904. The Herald remained in operation until 1966. The Smithsonian Museum of American History purchased the original 1880s printing equipment and displayed it for many years. 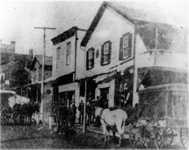 These three vernacular, commercial buildings are examples of construction types at the turn of the century.

This was the home of Antonia Ford, imprisoned as a spy following Ranger Mosby's night capture of the local Union commander, Brig. Gen. Edwin H. Stoughton, March 9, 1863. A search of the house had revealed an honorary aide-de-camp commission to Antonia from Gen. Jeb Stuart. Union Maj. Willard, a former Provost Marshal at Fairfax Court House, fell in love with Antonia, secured her release and married her.

During his March 1863 raid, Ranger John S. Mosby searched here, with no success, for the Union mercenary Col. Percy Wyndham who had called Mosby a horse thief. Mosby had replied that the only horses he had ever stolen had Union troopers on their backs armed with two pistols and a saber. This was later R. Walton Moore's home, congressman and counselor of the State Department under Franklin D. Roosevelt who was entertained here. (President William Howard Taft attended a garden party here sometime after his presidency.)

It was in this house that Ranger John Mosby captured the Union area commander Brig. Gen. Edwin H. Stoughton, in bed, the night of March 9, 1863. Mosby awoke the general with a slap. "Get up, general, and come with me." Stoughton roared, "What is this? Do you know who I am, sir?" "I reckon I do, general. Did you ever hear of Mosby?" "Yes, have you caught him?" "No, but he has caught you." Mosby also captured 2 officers, 30 soldiers, and 58 horses. Upon hearing of this action, President Lincoln disgustedly remarked that he could create another general with the stroke of a pen, but he surely hated to lose those horses.

The original jail (1802) burned down in 1884. The Alexandria Jail was used until this building was completed. The jailer and his family lived in quarters in the front until the early 1950s.

The Fairfax Courthouse is listed in the National Register of Historic Places. George Mason petitioned the General Assembly in 1790 to move the courthouse to "such a place as should be found most convenient near the center of the County." Designed by James Wren and centrally located at the crossroads of Little River Turnpike and Ox Road, Fairfax County Courthouse was completed in 1800. During the Civil War is was occupied by Union troops and used as a headquarters and lookout station. The Fairfax Courthouse survives as a symbol of an era when the courthouse was the center of community activity for county residents.

In memory of Capt. John Quincy Marr, CSA, the first Confederate officer to be killed in the Civil War during a military engagement between the opposing forces. He commanded the Warrenton Rifles during the Union cavalry attack at 3 am on June 1, 1861. His body was found in a clover field 800 feet southwest of the Court House at daylight. Note that the cannons are facing north, as do all cannons at Confederate monuments.

The first skirmish of the Civil War occurred on Main Street, June 1, 1861. Ex-Governor, "Extra Billy" Smith, a civilian , ran from this house to take charge of the Warrenton Rifles. Their commanding officer, Capt. John Quincy Marr had been killed, the first Confederate officer killed during the Civil War in a military engagement between the opposing forces. Union Col. Johnstone was billeted here during Ranger Mosby's March 9, 1863 raid. However, Johnstone escaped capture by hiding beneath the outhouse, wearing only his nightshirt.