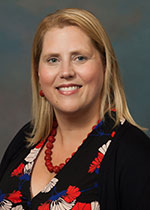 The Country Club Hills resident is an issue advocacy specialist with more than 15 years of professional experience in Washington, D.C and in South Asia. She currently works as the marketing and communications manager for Girls on the Run of NOVA, a non-profit with offices in the City of Fairfax.

Originally from Blaine, Minn., Passey earned her bachelor’s degree in religious studies and her master’s degree in political management from The George Washington University.

She and her husband, Michael, have four children.