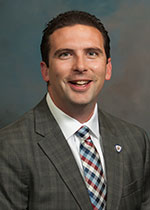 Stehle is currently serving as the Vice President of the Virginia Municipal League. He is also serving as the Chair of the Metropolitan Washington Council of Governments Chesapeake Bay and Water Resources Policy Committee. Stehle, a city resident since 2007, has chaired the city’s Parks and Recreation Advisory Board. He also served on the Green Acres Feasibility Study Committee and the city's Branding Advisory Committee.

The Oxford Row resident, who served as president of the Oxford Row Civic Association, is a director with Data & Insights Division of Tyler Technologies. As a senior analyst with the U.S. Government Accountability Office (GAO), he received a GAO Meritorious Service Award in 2013.

Stehle earned a bachelor’s degree in history from Washington & Jefferson College and a master’s degree in public and international affairs from the University of Pittsburgh Graduate School of Public and International Affairs. He also completed a master's degree in national security and strategic studies with the U.S. Naval War College.

He and his wife, Stephanie, have two children.