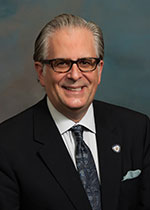 DeMarco serves on the Metropolitan Washington Council of Governments Metropolitan Air Quality Committee and Aviation Policy Committee; the Virginia Municipal League Community and Economic Development Committee; and the Potomac Watershed Roundtable, among others.

He previously served as chair of the City of Fairfax Economic Development Authority.

A member of the Regional Board of Advisors for HSBC Bank USA, DeMarco also is a local recruiter for the Columbia Business School and a student mentor for Penn State University. In Mosby Woods, where he has lived since 2000, he serves as area director for the Mosby Woods Community Association. He also is an active member of St. Leo the Great Catholic Church.

In 2017, DeMarco retired from the Global Customer Service Support of ExxonMobil’s Fuels, Lubricants and Specialties Business. Previously, he was an assistant vice president with the Philadelphia National Bank's Specialized Lending Division, focusing on public and non-profit organizations.

Originally from Philadelphia, he earned a B.A. in political science from Penn State University, a B.B.A. in economics from Temple University and an M.B. A. in finance from Columbia University.

He and his wife, Joanne, have three  children.