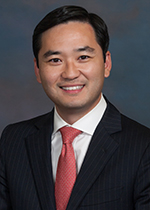 He previously served as the city representative to the Fairfax Alcohol Safety Action Program Policy Board. He is an active member of American Legion Post 177, and has served as the post’s second vice commander. A resident of the city since 2013, he is also the past-president of the Cameron Glen Homeowners Association.

The Cameron Glen resident is a senior congressional aide focused on government oversight issues and policy, and also serves as a lieutenant commander in the U.S. Navy Reserve. Previously, he was an executive officer at a Defense Department intelligence agency.

Yi earned his Bachelor of Science degree in logistics and intermodal transportation from the U.S. Merchant Marine Academy. He earned a Masters of Arts degree in national security and strategic studies from the U.S. Naval War College and a Juris Doctor degree from The George Washington University Law School.

He and his wife, Sarah, have two children.