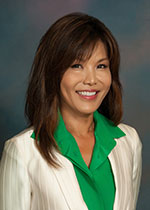 So P. Lim is serving her first term on City Council.

Lim is president of the U.S. chapter of the Taekwondo Humanitarian Foundation (THF), a branch of World Taekwondo Foundation, that works with refugee camp children to teach the values and principles of Taekwondo. She also has served as president of the Korean American Association of the Washington Metropolitan Area.

The Farrcroft resident earned her medical technology certification from the Temple School of Technology, as well as Life Underwriter Training Council Fellow Designation from the American College of Financial Services.

Lim is the owner and operator of Lim’s Insurance Agency, in operation since 1992 and located in the city since 1997. During her career with Nationwide Insurance and Financial Services, she has earned numerous awards, including: the President's Awards, Championship Awards, Community Service Awards, and Top Producer Award in Commercial & Financial Products.

She and her husband, Mark Hardy, have four children.