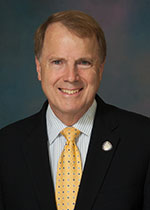 David L. Meyer is serving his second term as Mayor.

Meyer served five terms on the City Council (2008-17). As a Councilmember, Meyer served on the Board of Directors of the Metropolitan Washington Council of Governments (MWCOG), as well as on the MWCOG Transportation Planning Board.

Meyer has served on the board of directors of Historic Fairfax City, Inc. and is a co-author of the book Fairfax, Virginia: A City Traveling Through Time. He was a member of the Livable City Task Force and the City of Fairfax Bicentennial Committee, and he served as president of the Old Lee Hills Civic Association. He was on the design committee for Daniels Run Elementary School and served as president of the Fairfax High School PTSA.

A city resident since 1981, he is an Assistant Scoutmaster and Eagle Advisor for Troop 187 at Fairfax United Methodist Church, where he is also an active member.   He has supported and participated in service mission teams for the Appalachia Service Project.  Meyer has also served as a Trustee of Randolph-Macon College.

Meyer retired in 2016 from the U.S. Nuclear Regulatory Commission, where he was a career member of the Senior Executive Service and was awarded the commission’s Meritorious Service Award.   He earned a B.A. in political science from Randolph-Macon College and an M.P.A. from American University.   Meyer also attended the Federal Executive Institute in Charlottesville and the Executive Education Program at the Kennedy School of Government in Boston.

He and his wife, Cindy, have two children.