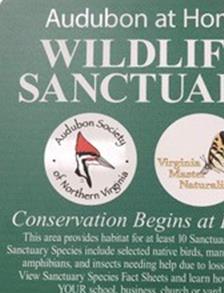 Recently the City applied for and received Wildlife Sanctuary designation from the Audubon Society of Northern Virginia. The Wildlife Sanctuary Program is a volunteer project that promotes citizen participation in conserving and restoring local habitat and biodiversity. In order to qualify you must prove that the area provides habitat for at least 10 Sanctuary Species. Sanctuary Species include selected native birds, mammals, reptiles, amphibians and insects needing help due to loss of habitat. In addition, the City also met the “healthy park” pledge of reducing our pesticide and fertilizer use, planting native species and supporting birds and other wildlife through the use of pollinator and rain gardens, meadows and water aerators. Thank you to the volunteers who tracked and reported the species at Ashby Pond!

This accreditation is a valuable measure of an agency’s overall quality of operation, management, and service to the community.

The rigorous process demonstrates that the city met at least 90 percent of CAPRA’s 126 individual standards, which include operations and management processes (financial, human resources, safety and more). The city is one of seven Virginia municipalities, and 141 municipalities nationwide, to have received CAPRA accreditation.

“This is a proud achievement for the City of Fairfax,” said Mayor Steven Stombres. “This accreditation reaffirms the city’s ongoing commitment to excellent park facilities and recreation programs for the Fairfax community and its visitors. These parks and recreation services are a vital component of quality of life in the city, and the accreditation reaffirms our commitment to providing these services.”

Cathy Salgado, the city’s parks and recreation director, noted, “City parks and recreation services are enjoyed by people not just in the city, but from across the nation and around the world. Our renown festivals, community events, and more than three dozen parks, large and small, help make Fairfax the place to be in Northern Virginia.”

CAPRA is one of the two distinct accreditation programs sponsored by the NPRA. CAPRA accredits park and recreation agencies for excellence in operation and service. Agency accreditation is available to all entities administering park and recreation systems, including municipalities, townships, counties, special districts and regional authorities, councils of government, schools, and military installations.

NPRA has recognized the city’s excellence in recent years. In 2011, NPRA and the American Academy for Park and Recreation Administration awarded the city its Gold Medal, which honors communities throughout the United States that demonstrate excellence in long-range planning, resource management and innovative approaches to delivering superb park and recreation services with fiscally sound business practices.

AAPRA and NRPA selected agencies to compete for one of park and recreation’s highest honors. The Gold Medal Award honors communities throughout the United States that demonstrate excellence in long-range planning, resource management, volunteerism, environmental stewardship, program development, professional development and agency recognition. Each agency is judged on its ability to address the needs of those it serves through the collective energe4is of citizens, staff and elected officials. A panel of five parks and recreation professionals reviews and judges all application materials. Judges are chosen for their considerable experience and knowledge in parks and recreation on both local and national levels.
Communities submit an extensive application that is judged among other communities in their classification. The classification is based on population. The City of Fairfax is in Class V (population 25,000 and under). The City of Fairfax was selected as one of the four finalists in this classification. The other 2011 Gold Medal Finalists were: City of Green River, Wyoming; City of Lafayette, Colorado and City of Cullman, Alabama. The finalists were then required to submit a 12 minutes DVD that best depicts the community and the parks and recreation department.
The 2011 Grand Plaque Recipients were announced live during NRPA’s Annual Congress & Exposition in Atlanta, GA in November 2011.
The American Academy for Parks and Recreation Administration (AAPRA) is a non-profit organization founded to advance knowledge related to the administration of recreation and parks; to encourage scholarly efforts by both practitioners and educators that would enhance the practice of parks and recreation administration’ to promote broader public understanding of the importance of parks and recreation to the public good; and, to conduct research publish scholarly papers, and sponsor seminars related to the advancement of parks and recreation administration. www.aapra.org
The National Recreation and Park Association (NRPA) is a national not-for-profit organization dedicated to advancing park, recreation and conservation efforts that enhance quality of life for all people. Through its network of roughly 21,000 professionals and citizens, NRPA encourages the promotion of healthy lifestyles recreation initiatives, and conservation of natural and cultural resources. www.nrpa.org

Karen Lussier, Recreation Manger, was awarded the Outstanding New Professional Award at the VRPS annual conference held I Hampton on September 13, 2010. This award is in recognition of outstanding commitment and achievements in the parks and recreation field.