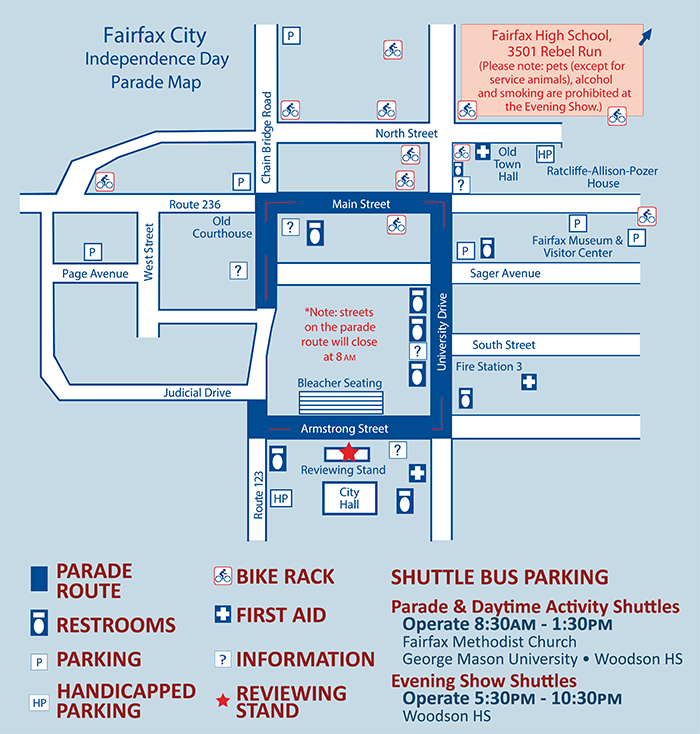 The City of Fairfax's Independence Day Parade and Fireworks began in 1967. Organized by the Delta Alpha Chapter of Beta Sigma Phi Sorority, the parade has developed into the largest in the Commonwealth of Virginia. The Parade has all the requisite ingredients for the 4th of July: marching bands, floats, Shriners' little cars and big motorcycles, old fire engines, clowns, and the scorching sun. The parade has featured flyovers by the Flying Circus Aerodrome, and in 1996 a hot air balloon race. Sponsored by radio station WXTR-104 FM. The parade is followed by an Old-Fashioned Fireman's Day, in which area fire companies compete.

In the early, small-parade days, the Independence Day festivities could be handled by volunteers, assisted by the City's Public Information Office and supported by such stalwart sponsors as American Legion Post 177 and VFW Blue and Gray Post 8469. During the 1980's, the City's Parks and Recreation Department began over-seeing the festivities. However, the parade's entrants, sponsors and community groups became increasingly numerous, rendering the all-volunteer nature of the parade unfeasible. Thus in 1990 the Independence Day Celebration Committee (IDCC) incorporated as a non-for-profit organization. It now receives City funding and staffing assistance from Parks and Recreation.