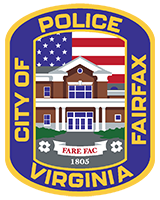 The police department had four patches prior to the current patch. The first patch was a triangle with "Fairfax Town Police Va." on it. The second patch stated "Fairfax Town Police Va." with a monument and cannon reflecting those standing in front of the historic courthouse in the background. In 1961 the word town was removed from the patch when the town became a city.  In 1965 the patch again was changed. It read "Fairfax City Police Virginia" with a cannon and the monument on top of city hall. In 1980, the City of Fairfax Police Department changed the uniform shoulder patch to the current style.

In 1973 the City of Fairfax adopted the City's Coat of Arms, created by the College of Arms in London, England. The crest of the Coat of Arms has a mural crown representing a circular stone wall, which symbolizes a city. On top of the crown is a seated Griffin. The Griffin is half eagle and half lion. The Griffin represents the alliance between America and England, and recalls the founding of the Virginia colony by England. Endowed with strength, it is supposed to act as guardian of the treasures. The lion in the shield has its feet and claws extended symbolizing the defending of a city. The colors of red, white and blue are those of both England and the United States.

The colonial dressed supporter represents Thomas, the sixth Lord of Fairfax, from whom the City was named. The other supporter of the crest represents a Confederate soldier, Captain John Quincy Marr, who was the first combat death in the battle of Fairfax Courthouse during the Civil War. There is a marker on the Courthouse lawn that reminds us of the event and of that part of history for the City of Fairfax.

The motto, "Fare Fac" was used by the Fairfax family and means "speak-do" or "say it and do it".

The City of Fairfax Police Department will only honor requests for uniform shoulder patches from sworn law enforcement personnel in the United States. Officers must submit a written request on their departmental letterhead. Subject to availability, the patch will be mailed to the requesting officer at the police department's official address.

Your request should be sent to: