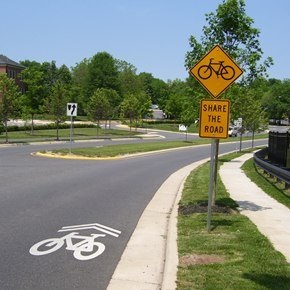 George Mason University, the City of Fairfax and Fairfax County have been working together since 2010 to study bicycle improvements between Mason and the Vienna-Fairfax-GMU Metro station. The Fairfax Mason to Metro initiative includes recommendations for an improved sign system and map, on-road bicycle facilities and trail improvements.

A task force consisting of representatives from Mason and City of Fairfax Departments including the Transportation Division, Parks and Recreation, and Community Development and Planning gathered to address the issue of bicycle transportation between Mason, The City of Fairfax, and the Metro. In July of 2011 Tyler Orton from George Mason University was recruited to do research, analysis and provide recommendations on how to improve the potential routes between these locations. The results of Tyler’s findings and recommendations based on input from several stakeholders were summarized in a report presented to the University-Community forum on June 14, 2012 and City Council on July 24, 2012.

A map of the proposed Fairfax Mason to Metro route can be viewed here.

The city has installed shared-use lane markings on selected sections of Old Lee Highway. These markings, commonly known as “sharrows,” consist of two chevrons pointing forward with a bicycle symbol below. Sharrows are used to indicate to cyclists where they should ride in the road. Sharrows also let motorists know to expect bicyclists in the road. Some motorists and bicyclists are not aware that bicyclists have the same rights and responsibilities to use the road as do motorists.

The city plans to install signs reinforcing the message to share the road and give destination information for bicyclists along the route.

Free viewers are required for some of the attached documents.
They can be downloaded by clicking on the icons below.